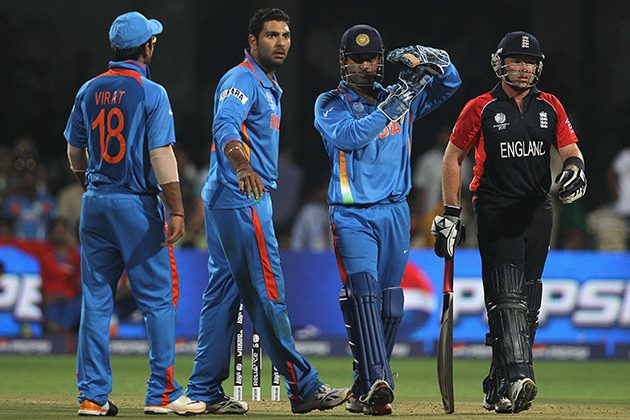 India and England played out a dramatic tie in 2011.(Photo: icc-cricket.com)

This classic World Cup match takes the cake when it comes to close finishes. A place in the final was on the line and South Africa was chasing 214 for victory.

South Africa collapsed to 61-4 in reply to Australia’s 205, thanks in part to a thrilling bowling display from Shane Warne, who finished with 4-29. But South Africa recovered through Mark Boucher and Shaun Pollock, and entering the final over, was 9-205 needing nine runs to win.

Lance Klusener smacked eight runs off the first two balls of the final over and South Africa seemed bound for the final. But then disaster struck. Klusener mis-hit the ball to mid-off and took off for a single, while at the other end fellow batsman Allan Donald did not hear the call, took off late and was run out.

The match was a tie and Australia advanced thanks to a higher finish in the Super Sixes.

Elimination from two consecutive Cricket World Cups as a result of tied matches? It seemed unthinkable, but that’s precisely what happened to South Africa in 2003, this time as host nation.

South Africa needed a win from the Durban match to advance to the Super Sixes. Sri Lanka won the toss and batted and a century from Marvan Attapatu and 73 from Aravinda de Silva helped their team reach 268.

With a storm brewing – literally – the host nation knew it had to keep up with Duckworth–Lewis targets in case the match ended prematurely.

As the drizzle began to build, Lance Klusener and Mark Boucher helped South Africa reach 229 just before rain paused play. Believing that to be the total needed under the Duckworth-Lewis system, the batsmen and crowd celebrated. But the total required was actually 230, leaving the Proteas one run short. No further play was possible and the match ended in a tie, ending South Africa’s World Cup dream for a second successive tournament.

3: 2007 Ireland v Zimbabwe – tied
It was Ireland’s first match in their first ever Cricket World Cup and it turned out to be memorable for more than one reason.

Playing Zimbabwe in Kingston, Ireland scored 221 thanks to a century from Australian born left-hander Jeremy Bray.

Zimbabwe seemed on track for a solid win, needing 19 runs to win from 39 balls with five wickets in hand after fifties from Vusimuzi Sibanda and Stuart Matsikenyeri. But Ireland dug in and three run-outs in the final two overs sealed the unlikely tie.

4: 2011 India v England – tied
This group stage tie ended up being a mere hiccup on India’s way to World Cup glory in 2011, but it was one of the most exciting results from the tournament.

India smashed the England bowlers to score an imposing 338. The total seemed high enough but England captain Andrew Strauss thought otherwise, scoring 158 and keeping victory within reach. England still needed 29 runs from the last two overs – a mammoth task – but they nearly got there.

Sixes from Graeme Swann, Tim Bresnan and Ajmal Shahzad saw England require two runs from the final ball. But they only managed a single and the match ended in a thrilling tie.

5: 1987 Australia v India – 1 run
It was the second day of the ICC Cricket World Cup 1987 in India and the host nation was playing Australia.

The visitors batted well, scoring a reasonable total of 6-270 thanks to a century from Geoff Marsh and 49 from David Boon.

India was coasting in response at 207-3 before the collapse started. Craig McDermott picked up 4-56 and India was bowled out for 269 with one ball remaining in the innings.

6: 1992 Australia v India – 1 run
Rain caused an interesting finish to the group stage match between Australia and India in the 1992 tournament. Batting first, Australia’s innings of 237 featured 90 from Dean Jones.

India batted well in reply, but rain interrupted play after 16.2 overs. As a result, the target was revised to 236 runs off 47 overs.

India came oh so close to victory, but ultimately fell one run short.

England needed a win to keep its hopes of advancing to the finals alive and were helped in their mission by big scores from Kevin Pietersen (58), Ravi Bopara (53) and Ian Bell (47).

But in a breathless finish, England fell two runs short of their target. Two runs were needed off the final ball with Bopara on strike, but he was bowled by Dilhara Fernando.

8: 1987 West Indies v Pakistan – 1 wicket (0 balls remaining)
West Indies headed into the match needing a win after dropping its second match of the 1987 tournament to England.

Solid scores to Saleem Yousif (56) and Rameez Raja (42) put Pakistan in a strong position in reply and even after losing key wickets, they were still in the box seat at 200-6. But three quick wickets fell to have Pakistan floundering at 203-9, before Abdul Qadir and Saleem Jaffar got the job done, guiding Pakistan home on the final ball with one wicket to spare.

9: 2007 West Indies v England – 1 wicket (1 ball remaining)
While the outcome of the match mattered little with neither team able to finish high enough on the Super 8s table to advance to the finals, pride was on the line when West Indies met England.

West Indies batted well to score 300 and their innings featured a 73 from Chris Gayle.
A century to Kevin Pietersen and 79 from Michael Vaughan put England on the right track, but their teammates fell around them.

In the final over, England needed three runs when the ninth wicket fell. But tailender Stuart Broad was able to withstand the pressure and guide his team home with one ball remaining.

10: 1987 final Australia v England – 7 runs (closest finish in a final)
This might not be in the top 10 closest finishes for any match, but it is the closest result in a World Cup final.

Australia was playing England in front of 90,000 fans at Eden Gardens. David Boon’s 75 and Mike Veletta’s 45 helped Australia post a healthy 253, including 65 runs off the last six overs.

England were on target before the loss of crucial wickets including captain Mike Gatting and when one over remained, England needed 17 runs for victory.

They managed 10, handing the World Cup trophy to Australia for the very first time.

Will Reliance Jio be Gamechanger in 2017?