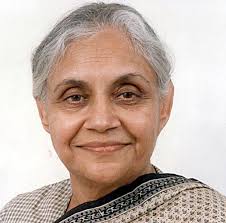 BJP leaders admit the AAP is their main foe in Delhi, but three-time chief minister Sheila Dikshit doesn’t feel that the Arvind Kejriwal-led party is an alternative to the BJP or the Congress.

As Prime Minister Narendra Modi goes all out campaigning for the Bharatiya Janata Party in Delhi, Congress leader Dikshit says her party is very much in the reckoning with a view to keeping the BJP out of power.

“The Congress agenda is to keep the BJP out. It’s a political battle,” said Dikshit, who was chief minister of Delhi for three consecutive terms that ended disastrously in December 2013 when Kejriwal defeated her.

In an interview with IANS, the 76-year-old seasoned leader left it all on post-poll numbers for a potential alliance with the Aam Aadmi Party which, she said, was only “trying to emerge as an alternative” in Delhi.

The former Kerala governor refuted media reports about her party’s possible support to the AAP in the event of another fractured mandate in the capital.

“I don’t know whether they (AAP) have any potential or not… That party is more of a media creation. Look at their behaviour the last time when they worked for 49 days and ran away.”

She said people were unhappy with all that happened after the AAP ran a minority government until February 2014 and the later President’s rule in the capital.

“People have seen (what happened)… One person who was given a chance to rule ran away whereas President’s rule did no good to people either,” Dikshit said.

She said that contrary to what political pundits say, the Congress was “very strong” in Delhi and its achievements of the last 15 years were the party’s ticket to a majority mandate.

“We are banking on our work… a track record of 15 years we can be proud of.

“We have done work and people can see it for themselves all around Delhi. Many are old enough to recall what the BJP did in the five years (it ruled Delhi) when people didn’t get water and power.”

A miffed Dikshit accused the BJP of grabbing the credit for giving legal status to 890 squatter colonies in the city.

“It was the work we started. But the BJP has a tendency to grab credit for what others have done and sell it to people as their own.”

Dikshit accused Kejriwal of making tall claims like providing free WiFi, free water and almost-free electricity. No government could ever function like that, she insisted.

“He (Kejriwal) is promising all sorts of things that are not viable. How can he give free WiFi connection? Only the central government can do that.

“He is trying to woo people (with false promises) and that is not ethically correct.”

Diskhit said she was all for Congress vice president Rahul Gandhi’s candidature for Congress presidency. She herself, she said, desired no key role in the central leadership.

“I am a Congress worker to the core. I work as and when the party needs my services,” said Dikshit, reiterating that she would not contest the election this time in Delhi.